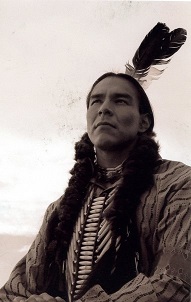 Sometimes when I witness unproven alternative therapies, I try to ponder scientific explanations for why a therapy might work and contemplate different ways to prove its effectiveness. Other times, I have absolutely no explanation. On my trip to the Enchanted Forest Reiki Center in Las Vegas, I encountered a story for which I have no explanation and I’m not even going to try to create one.

This ain’t science and doesn’t claim to be

I traveled to the center to meet Sean Wei Ma, a native American “spiritual practitioner,” and some of his patients he has treated. He provides his services at the Enchanted Forest-which has the “hippy new age” feel it’s name conjures in the imagination- prominently displaying healing crystals, mind expanding artwork, and mystical trinkets in the gift shop.

In many ways, if you were to call central casting for a film, Sean would be submitted to play the part of Native American medicine man. A soft spoken, charismatic man, his presence naturally put me at ease. He grew up as a member of the Cree tribe in British Columbia, Canada and recently moved to Las Vegas for family reasons. When he got here he contacted the Enchanted Forest to set up a location at which he could offer his services. He specifically did not want to be called a Shaman, possibly as that name may imply more respect than he thinks he deserves, but it is the best term I can think of to describe him. He considers himself a bridge to the spiritual world, dealing not with the body or even the mind, but rather with the supernatural. He is engaged in “spiritual warfare “against the “attachments” to our being which cause us physical, psychological and spiritual illness.
He would perform chants and songs during his treatment, and utilize various smokes from a pipe (tobacco, sage, and others) to treat the maladies of his patients. Inhaling smoke as medicine, he said seems odd to the western doctor, but where he came from it was an accepted and an easy way (compared to a liquid or a solid) as a means to deliver a medicine to a patient.

Ok.. so far so good…I’m following

At the Enchanted Forest, I arranged to speak with a few of Sean’s patients who had undergone treatment sessions with him in the past. One women Mary was suffering from multiple sclerosis experiencing increasing frequent muscle spasms, headaches, and episodes of twitching. She claimed, after one treatment with Sean, she had “98% less symptoms.”

After hearing Mary’s story, I began formulating theories, based on my medical world view, of how Sean’s treatments could possibly actually effect change in his patients. Maybe he relieved her stress and decreased her anxiety utilizing the placebo effect, instituted during his treatments? Multiple Sclerosis symptoms are know to wax and wane based on stress levels. It was a reasonable theory or so I thought.

But then I met Sean’s other patient Mark and after hearing his rather nutty story, I didn’t bother trying to explain anything with Sean anymore.

Mark was an unassuming low key guy in his early forties. He looked and spoke like a normal guy. He did not come off as some loon, looking for attention or prone to exaggeration. In fact I think he knew what he was about to tell me, made no sense. In fact he said he story was a bit “looney.” and only opened up to share it after he become comfortable with talking to me. My point is, I at least believed that he believed every word he was telling me.

I was recording the interviews, so I think the best way to impart this tale is to just transcribe what he said to me and let you come to your own conclusions.

Here it is (Mark is speaking to me):

“My story is a little emotional. I had moved to the Bay area probably about eight years ago and I started at a really stressful job. And eventually my health started to take a turn for the worse. And it became increasingly worse and I started getting into a deep fog and clinically they would call it depression. But I knew that it was a little bit more than depression. I felt as though.. I had an attachment… spiritually. An entity that was attached. And that wasn’t good. I grew up in rural North Dakota, and very Catholic small town. I believe in God and all that stuff and went to church on a regular basis. And, you know, I lost my way with working. And it got to be pretty tough and pretty stressful. And the next thing you know, the darker became dark and I was looking for someone to actually heal me.
And when I was in the Bay area, I went to quite a few energy healers and spent thousands upon thousands of dollars trying to get this energy cleared from me. And during that time I has issues going on in my house too. Things that weren’t.. natural.
I got to a point where I hit rock bottom and you try conventional medicine and I tried antidepressants cause I thought I was going crazy, but I knew the stuff occurring in my house and the things showing up in my house were let’s say- supernatural, evil. I went to hypnotherapy and I felt good after I left, but I still had the same issues. I had a lot of energy healing- I felt good after I left the session, but the entities were still there. Things were still happening at my house. They were things you would only tell a priest…and you would only go to a priest for. And since I was Catholic… one of the reasons I did not go to a priest is because if you don’t go to a Catholic church and you have not bonded with a priest and you’re not part of that church, you just can’t go in and get healing done. It’s something they just don’t do. And some of things that kept happening in the house. I started having dead animals show up at my doorstep- not just one or two, but on a consistent and regular basis. Right outside my door- it was rather freaky. And then there were things happening in the house that were unexplainable. I can go into detail with one of them. It’s freaky. I like to share-because my visit with Sean took care of it. It released everything and tomorrow will be a year and I have not encountered one single thing since then and I feel as though spiritually, like my energy is growing, and I feel like things are getting a lot better.
I was in a very dark space and for whatever reason it was just getting crazier. But one particular thing that was happening in the house, among many things, is I came home from work one day and went into my bedroom I smelled feces. I thought ‘Gosh this just smells terrible.” I looked under my shoes, of course, and nothing there, and I went and changed my work clothes and I opened the door and burnt incense to get rid of the smell. This occurred everyday for two weeks and the smell just continued to get stronger and stronger in my bedroom and I was ripping the house apart looking for where the smell was coming from. And then one Sunday, I got on the bed to strip the bed and there was a pile of feces underneath the sheets.. very old stuff and then… it gradually grew fresh. It was on the other side of where I was sleeping. Yeah- it was frightening.
Physically I was continuing to get sicker and sicker and sicker and doctors couldn’t diagnose me with what was wrong.
I came to Vegas to celebrate my birthday and came upon Sean’s treatments at the Enchanted Forest and I thought he was only one who could probably take care of things. I needed a Shaman or a Medicine Man or a priest,

At the end of my session with Sean.. I had two entities attached to me… one left my right leg… I could feel it pull off of me and ascend into the sky.. and the second one, within a second or two, pulled from my left arm and ascended. It’s like they were attached like glue and came off and left. And I sat up and woke up and I felt at that moment completely different. Yeah, that’s my story. I owe my life to him, if you think about it. I’ve had no darkness since then.”

I really don’t know what to say to that one.

My first thought was maybe there was a vagrant cat in the neighborhood that was dropping dead animals on his porch, sneaking into his bedroom and crapping in his bed. However, it’s pretty unlikely for a wandering pooping cat to cause massive unrelenting depression, and then that depression is instantaneously cured in less than an hour session by smoke and chanting.

So I’m just going to choose to hear his story and say “wow.”