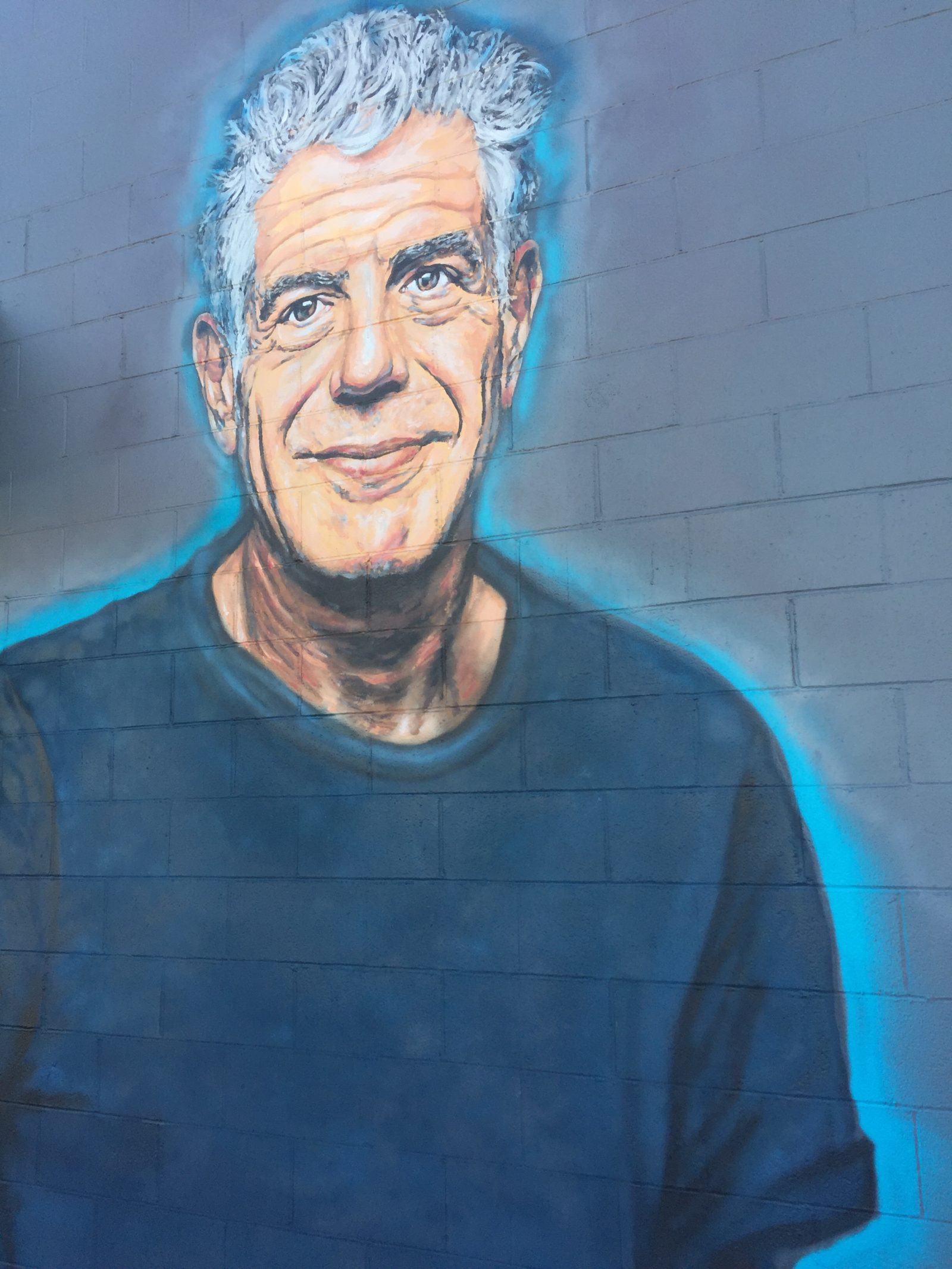 His death hit me pretty hard. I had read all his books, and watched every episode of all his shows. I once saw him speak live on a book tour. He seemed to be living, for me, what I thought was an ideal life. He got to travel the world, explore different cultures, and eat possibly the greatest meals any human on earth has ever eaten- all while having full creative control over a successful TV show documenting his journeys. It just seemed awesome. He would regularly claim he had the best job in the world. It was a plausible claim. He wasn’t just a celebrity to me; he represented the person I wanted to be.

And one evening after a filming a show with his best friend in idyllic northeast France, he took his bathrobe belt and hanged himself in the hotel bathroom. Fuck.

My experience with suicide

My first exposure to death as a child was when my father’s brother very unexpectedly took his own life. Twenty five years later, I can still viscerally conjure up my bewildered pain the moment I heard the news. A combination of disbelief, grief, second guessing, and anger cast a shadow on the funeral and haunted the family for years to follow. But suicide is not a rare phenomenon- it is ubiquitous. A medical student colleague of mine jumped to her death right after she finished her surgical training. On the very day of Bourdain’s passing, we admitted a patient to my ICU who for some unknown reason attempted to purposefully overdose on bath salts only hours after undergoing a healthy ultrasound on the IVF conceived 18 week fetus she was carrying.

We, the living, struggle to understand the motivation of those who take their own lives. When a person we know kills himself, we grieve very differently than we do if that same person dies from a heart attack. Suicide hurts those left behind in a way that no other disease does, infecting survivors with judgment and anger.  It’s really hard to dispassionately see suicide for what it simply is- a terrible final symptom of a devastating disease. It’s the sudden cardiac arrest of depression.

Depression as a storm.

I recently overheard an allegory that eloquently portrays depression and suicide.

Picture a man struggling to get home through a terrible winter storm. The falling snow storm turns the whole world to white so nothing can be seen. The man walks and walks seemingly forever, searching for any sort of shelter, fighting through the bitter cold and pain of a piercing wind. After a long struggle, exhausting all reserves of energy, the man reaches a point where he is too tired to go on. He has lost all hope that he can make it home. His only option is to sit down in the snow and go to sleep. He knows he will freeze to death, but he has nothing left to give. The pain is overwhelming and in his mind, sitting down to die is his only unfortunate choice. Little does this poor man know, because he cannot see through the blinding white, that he is only 20 feet from his front door.

A person who is not depressed sees the same man wandering around his front yard, but from her vantage point there is no storm. The man is simply a few feet from safety of his house.  While a healthy person sees a beautiful sunny day, a severely depressed person sees an unrelenting winter storm.

We need to ask what is causing this storm.

Suicide rates have been climbing the last 20 years. It’s one of the few diseases that is actually getting worse with time. In 2016, 45,000 people in the United States took their own life.  Social isolation, substance abuse, lack of mental health treatment, drug and alcohol abuse, and gun ownership all correlate with suicide. Over 50% of those who commit suicide have no diagnosed mental disorder. It is difficult to predict who will commit suicide as over 80% of people never mention suicidal intentions, and it seems the final act is often impulsive.

As a physician, I get annoyed when someone on the news speaks about a celebrity who has survived a suicide attempt and earnestly suggests: “Now they can get the treatment they need.”

What exactly does that mean?

Treatment– such a vague non-specific term used by those who are not administering it, or responsible for it’s success.  What treatment exactly? Antidepressants, psychotherapy, electroconvulsive therapy or even placebo pills? They all can help, but none of them individually or together is a simple “cure.” Treatment is a long and arduous journey where the patient, caregivers, and associated family and friends all navigate a difficult path together.

Let’s be blunt, depression is really hard to treat because we don’t really understand it. Biologists like to publish papers describing depression as an imbalance of neurotransmitters, but outside of high school biology class and a pharmaceutical company’s promotional drug pamphlets, the disease is not that simple. Depression is complex. It is probably not one disease, but likely a collection of fundamentally different disorders with similar symptoms. A person’s history, personality, cultural norms, coping skills and biology all intersect in a complicated dance. If we think of depression as anything less complicated and convoluted, we will continue to misunderstand it and are destined to be shocked when someone takes their life unexpectedly.

So how can we approach treatment of depression and the suicide epidemic?

Usually when we think of treating depression and preventing suicide, we conceive of treating a depressed individual. That is how most physicians practice medicine. We may use drugs and/or therapy, but our main goal is to treat our patient. This is obvious and where we should focus our research.

We can also try to decrease suicide levels in society from a public heath perspective. It has been shown that if we decrease the number of guns, suicides go down. (Good luck on politically achieving that goal). Increasing access to mental health care, educating the public of suicide risk factors, and promoting resources for those in need can help deter suicide. Suicide hotlines can help someone pause during that impulsive moment when they are debating taking their own life.

Health of our Society- Connectedness.

There is one other unique factor that has been found useful in preventing suicides- the presence of what is termed  as connectedness..

It has been shown a person’s sense of connectedness can be protective- possibly preventing the escalation from only thinking about suicide to actually physically attempting suicide. Connectedness is defined by the CDC as “the degree to which a person or group is socially close, interrelated, or shares resources with other persons or groups.” In other words, being part of group that is important to you. If that group is a positive influence, it can be protective against suicidal behavior.

I’m not sure where in the spectrum of healthcare this concept of connectedness fits. I am sure there will likely never be any reimbursement from insurance companies to physicians for promotion of connectedness. It is also not exactly a public health issue, with attainable goals and benchmarks that can be implemented in a society. Connectedness comprises everything from the daily interactions of individuals, to the social structures of schools and work, to the development of spiritual connections to others and finding meaning and purpose in of our lives. Where do we fit in with all the other humans roaming the earth? If it all sounds kind of “New Age” and a potential founding tenet of a cultish utopian society, it kind of is.  But it also actually seems to be important in our overall mental health.

But how are we connected to others?

I certainly know, it is possible to be in a room filled with 100 people and feel completely alone. It is also possible, under the right conditions, to have a deep connection to someone who you meet for 30 minutes at a bus stop. How we connect with other human beings on a deeper level is one of those things that’s hard to define and even more difficult to manipulate.

What about our culture? Are we losing connectedness?

Are we losing connectedness in the modern world and is that why suicide rates are increasing? Marriage rates are down, friendships are transient and less grounded as our jobs move us from place to place, we don’t talk to our neighbors as much, and a lot of people prefer texting to actually human contact.

What about social media?

Mark Zuckerberg believes the internet can bring us together. It’s possible, but could social media instead be making us feel more like the lonely person in a crowded room?  We admire our friends perfectly instagrammed vacations as we post our own choreographed status updates. Who knows- maybe the irony of social media is it actually socially isolating us from real personal interaction?

Is it possible to actively foster connectedness as a means of suicide prophylaxis?  I don’t know. But it is a question we must ask ourselves. Suicide rates are getting worse. Could it be because we are living in an increasingly emotionally disconnected world? If we need to have a cultural reckoning to bring our technological advancements in line with our basic social needs, we shouldn’t be afraid to initiate that discussion.

But let’s not be naive- it is far more complicated.

Anthony Bourdain spent his time on television connecting his viewers to the world around them. I’m sure he had access to any medical care he could want. If he needed therapy, he could get it. If he wanted a doctor, he could afford it.  He was not a loner, disconnected from the world. He had a girlfriend, a daughter, and his best friend was in the adjacent hotel room when he took his own life. If he wanted to reach out, he could have. There would have likely been scores of people to help him. That’s what makes his situation so disheartening. Maybe he felt because he had “the greatest job in the world” to complain of his pain would only be burdening those around him? We will never know.

We have to accept that no matter how hard we try, sometimes we just cannot see the personal storms others are trying to navigate.

But a real connection to the right person at the right time, could be far more impactful than we know. It’s certainly worth a try.

If you think you are lost in your own storm and are contemplating taking your own life call the National Suicide Prevention Lifeline 1-800-273-8255.